To register, click HERE and select "Drop-In Classes, Camps & Workshops”, then choose the date you want to register for! 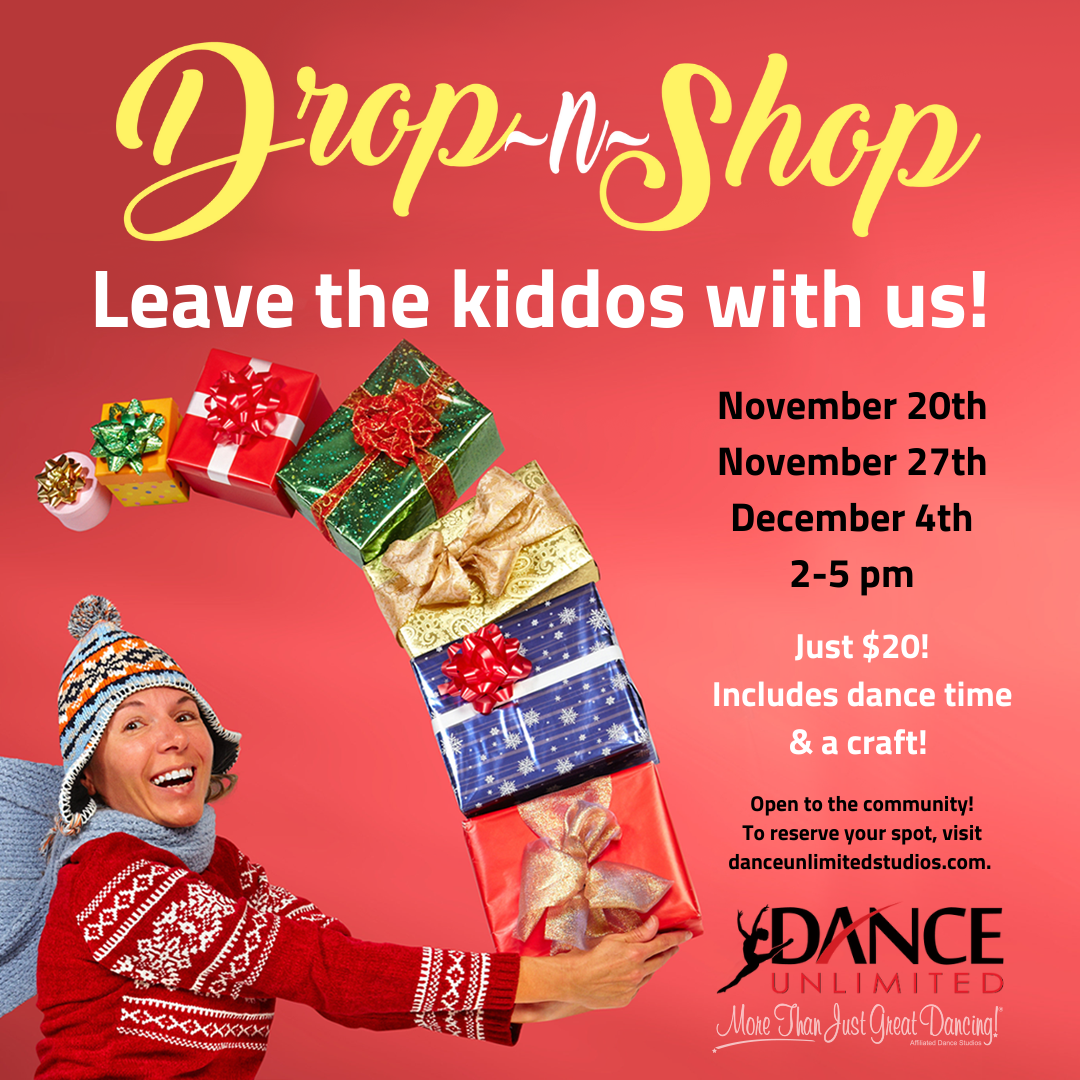 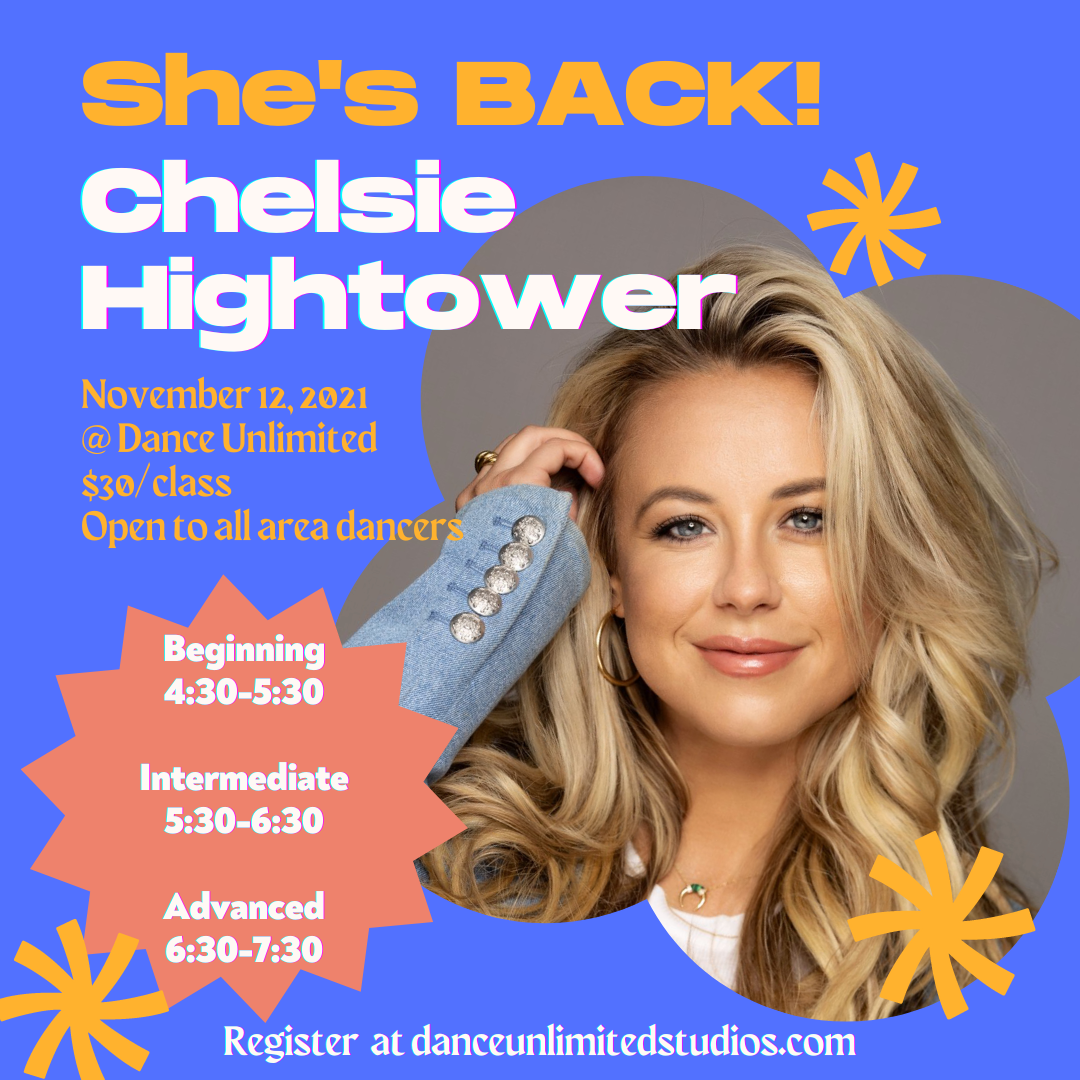 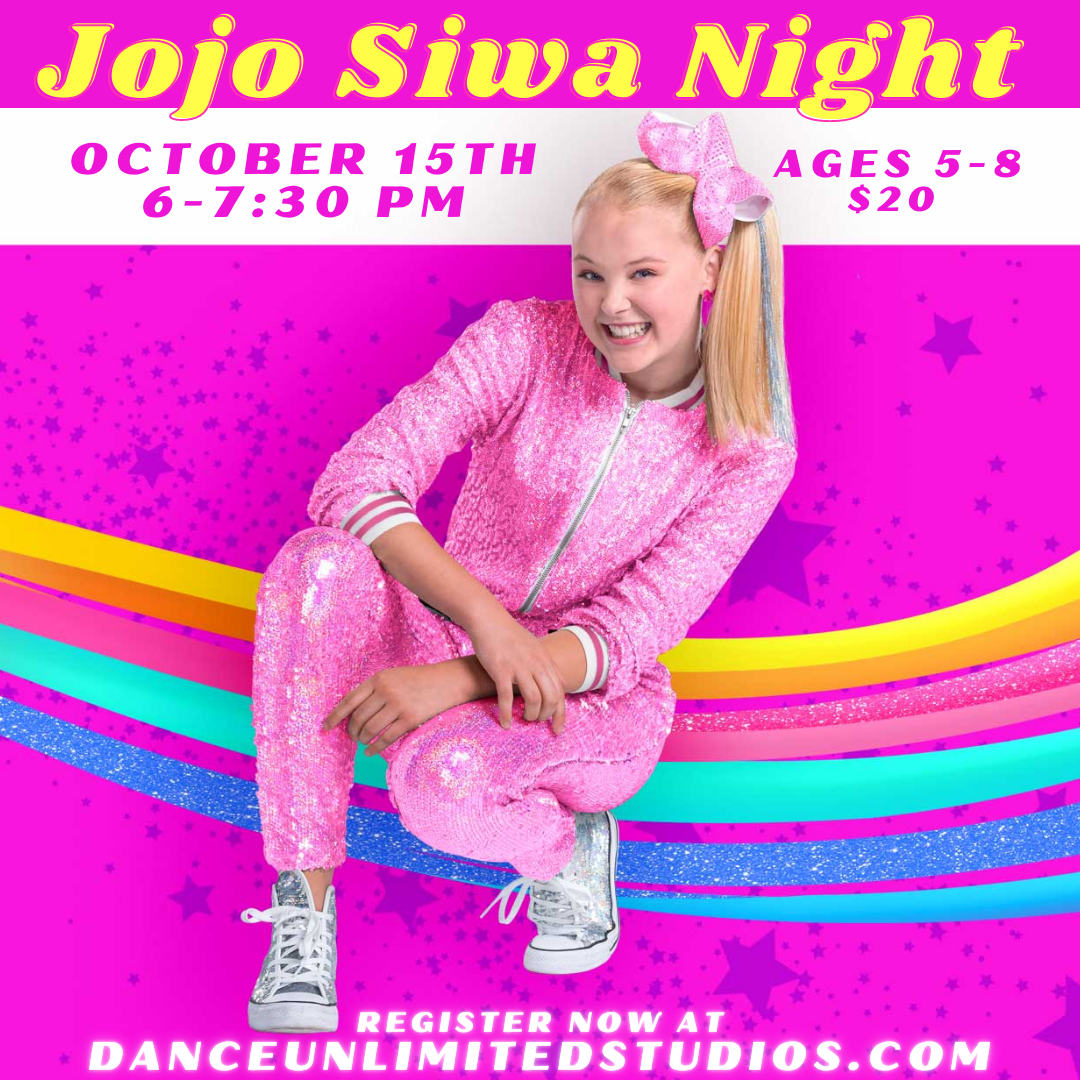 It's that time again...Our annual JoJo Siwa Night! Join us for a night of bow creations and all things JoJo! You'll get to create your own bow and dance to one of JoJo's most popular hits! To grab a spot, just click HERE and select "Drop-In Classes, Camps & Workshops”. 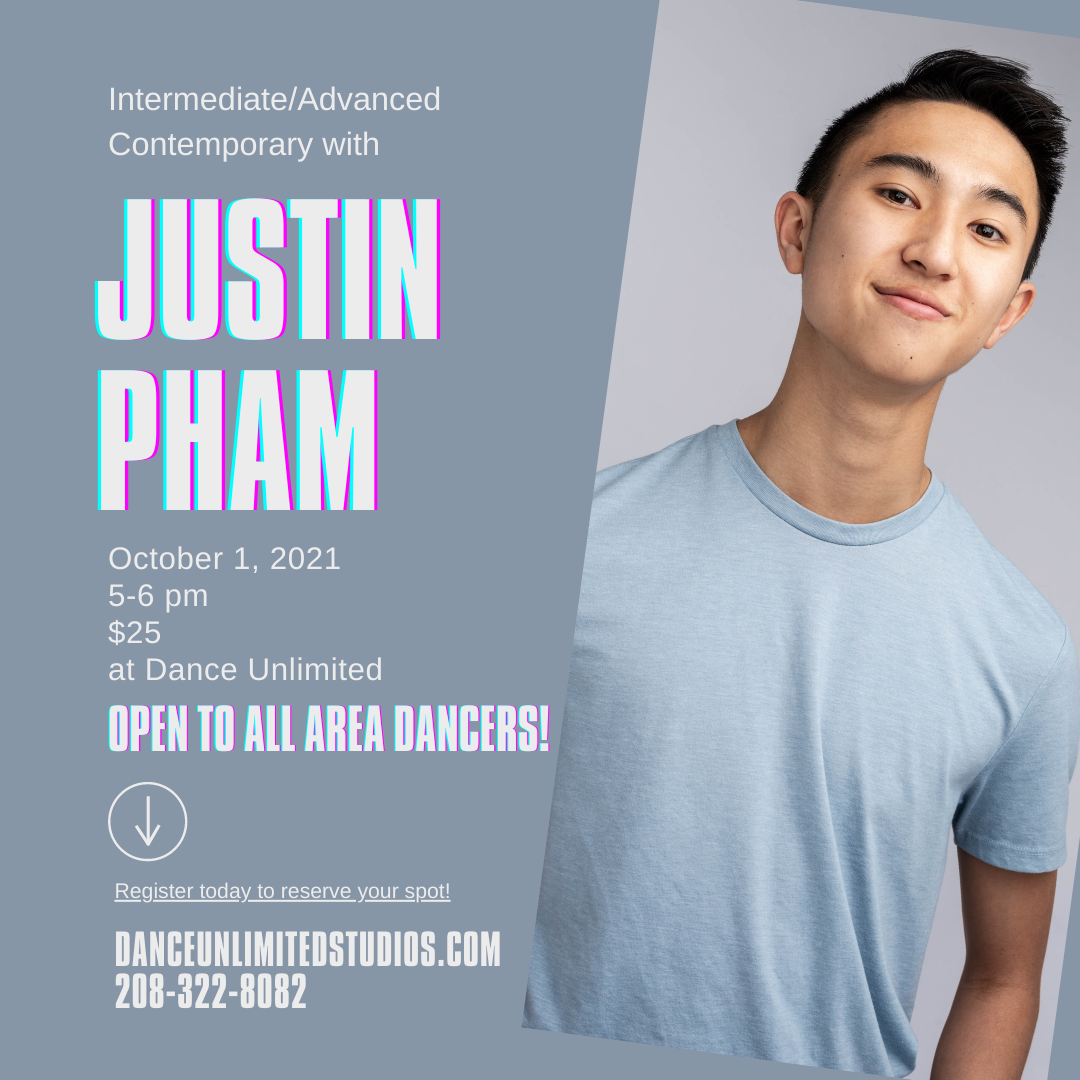 Justin Pham is a dancer, choreographer, and creative director originating from San Diego, California. While in high school, Justin became a finalist 3 times at The Music Center’s Spotlight Dance Awards where he was eventually given the title of Honorable Mention. After receiving much of his primary training at Murrieta Dance Project, Justin was admitted into one of the most prestigious and reputable BFA dance programs in the nation, the USC Glorya Kaufman School of Dance. It is here that Justin is able to study and train under brilliant artists such as William Forsythe, Desmond Richardson, Jodie Gates, and Saleemah E. Knight. While working toward his BFA in Dance and Minor in Cinematic Arts, Justin was featured on Fox’s hit television program “So You Think You Can Dance” where he worked with choreographers such as Mandy Moore, Travis Wall, Luther Brown, NappyTabs, and Dmitry Chaplin. In addition to being a part of the Season 15 Top 20, he was also able to be a dancer in Mandy Moore’s Emmy award-winning number, “Brand New.” Justin has proven himself as a strong emerging choreographer through the creation and production of his numerous independent dance films, as well as his acknowledgments at the McCallum Choreography Festival in 2017, where he was one of the youngest finalists recognized. Justin hopes to create a more cognitive and educational perspective on dance and choreography, specifically through the mediums of film and television and works to become a multifaceted and interdisciplinary artist to innovate the dance industry for generations to come. 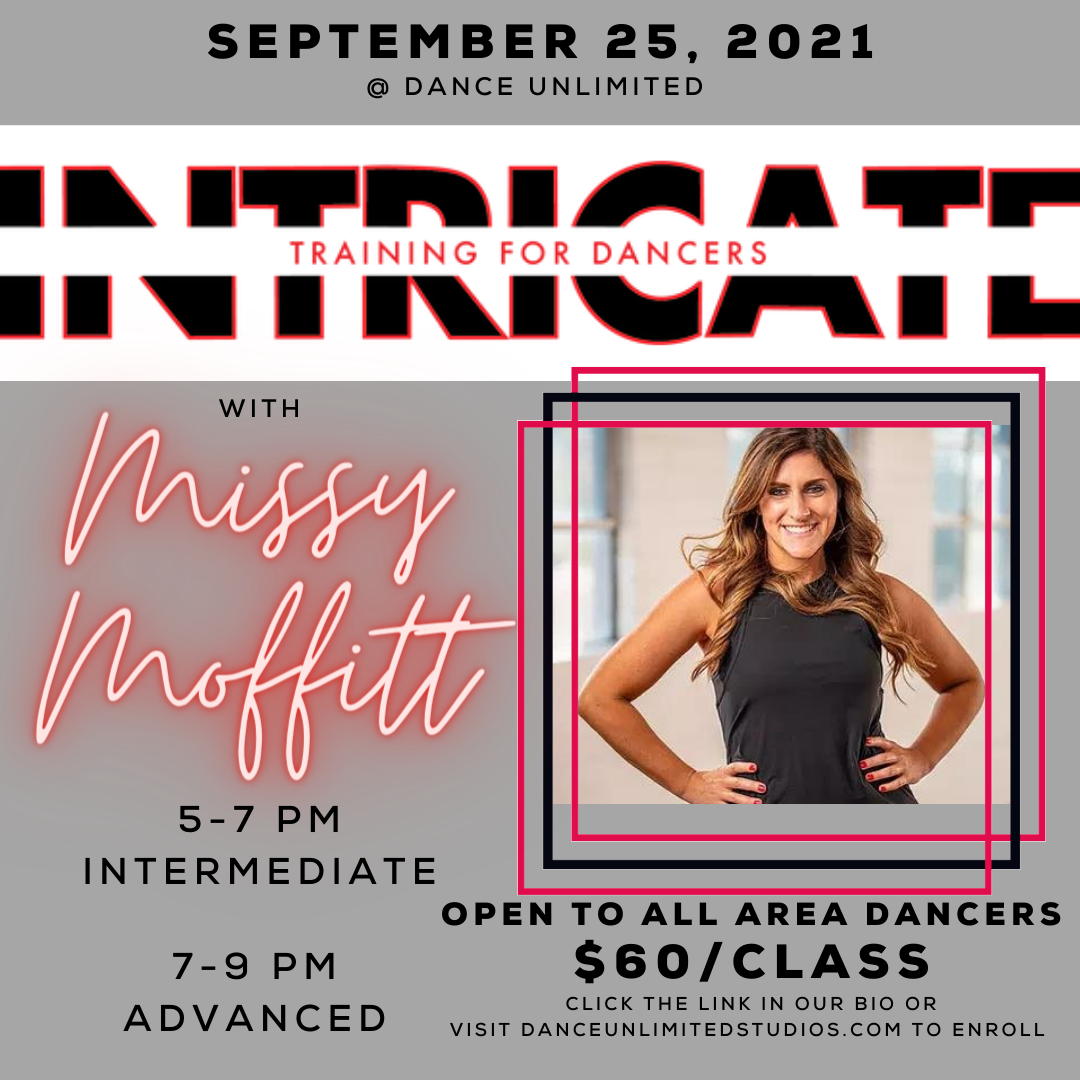 More about Missy and Intricate Training for Dancers---->https://www.missymoffitt.com​

Missy has created a specialized training method that enables students to understand and connect with their bodies allowing movement quality through proper muscle structure and technique. Through ITD’s hands-on approach and equipment usage, students are able to enhance their body knowledge by providing an understanding of a dancer’s anatomy. Each class is structured to include strength, flexibility, and a variety of techniques with a focus on core alignment and body connection. Their intensives present an innovative way of training and conditioning for dance that will increase power, strength, flexibility, alignment, and balance with a focus on core alignment and body connection. Missy’s desire for all who train with ITD to be inspired to grow and accomplish their goals through consistent and ongoing training; never settling but always striving to be their personal best. 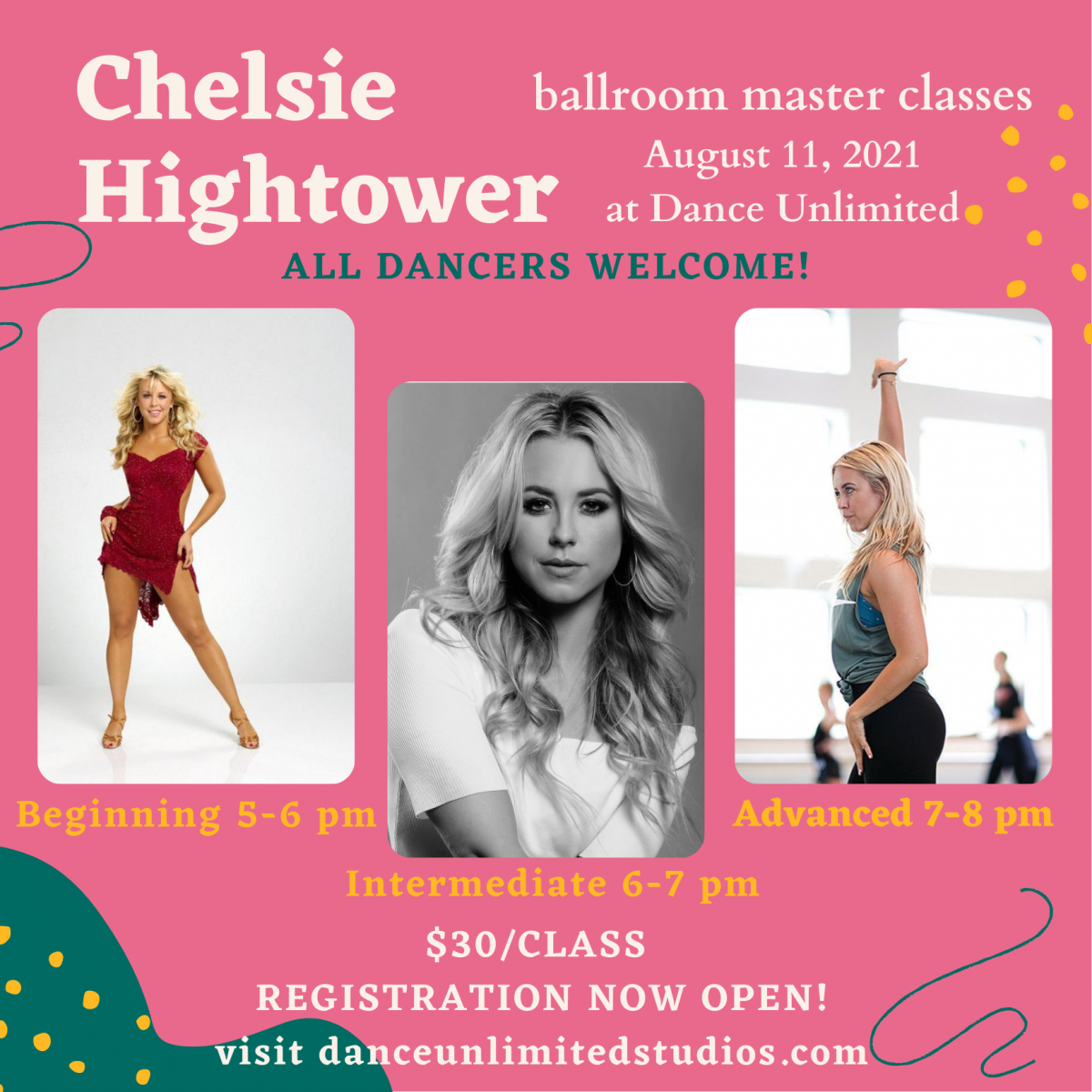 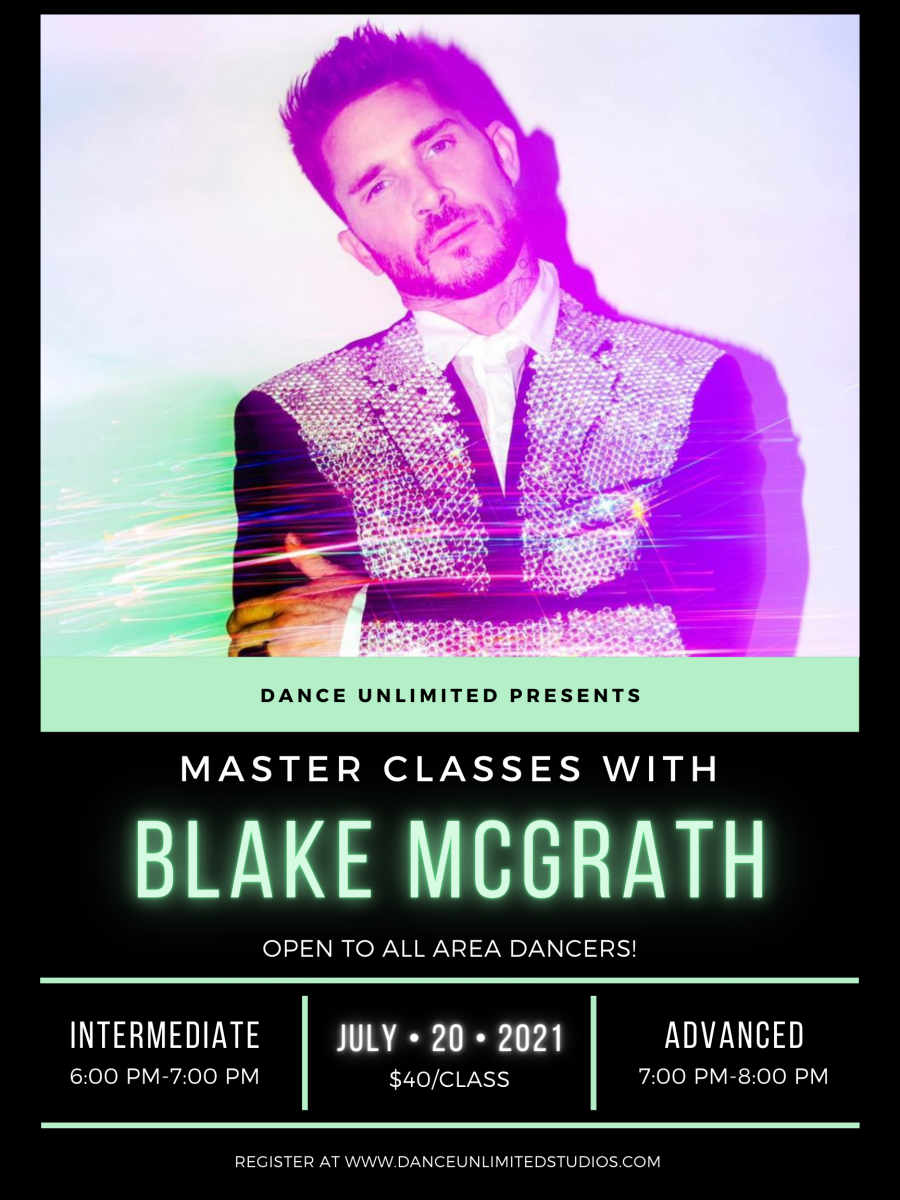 By the age of 25, accomplished dancer Blake McGrath has already shared the stage with Madonna, Janet Jackson, Britney Spears, Jennifer Lopez, Mariah Carey, and Beyonce. He has even been fortunate enough to perform alongside the King of Pop Michael Jackson for his 30th anniversary special on CBS.

Blake is widely regarded as one of the best dancers of his generation; these skills became apparent on the premiere season of the famed US dance competition-reality series, So You Think You Can Dance. After making it to the finals of the show, Blake quickly became the "it" dancer in Los Angeles. Immediately following SYTYCD Blake was cast in Jennifer Lopez's MTV Dance life, a reality series that chronicled Choreographers in LA. Immediately after that he returned to Canada to Judge and choreograph 4 seasons of SYTYCD Canada!

After reaching the peak of the dance world, Blake McGrath felt it was time to pursue his inner passion: music.

The Pop/R&B album features the radio hit songs "The Night" "Stage Fright" and "Relax". It was the accompanying videos that clearly demonstrated Blake's talent as a musician and his natural ability to dance, as well as his passion for movement and creativity. In the spring of 2011 Blake's "Stage Fright Tour" headlined at 50 venues in North America.

His most recent EP "I Am Blake McGrath" hit top 10 albums on iTunes worldwide including his smash hit "Missing You".

Blake's has recently been seen guest choreographing and performing on Hit shows including ABC's "Dancing With The Stars" and Life Time's "Dance Moms".

Blake has also choreographed and appeared extensively in high-profile commercials and advertisements for various Gap campaigns alongside Sarah Jessica Parker and Old Navy, as well as Pepsi, Hummer and iPod. His film credits which include Academy Award-winning films, Chicago and the musical, Rent.

Check out blakemcgrathonline.com for more info!

July 13th~RICKY MAALOUF IS IN STUDIO! 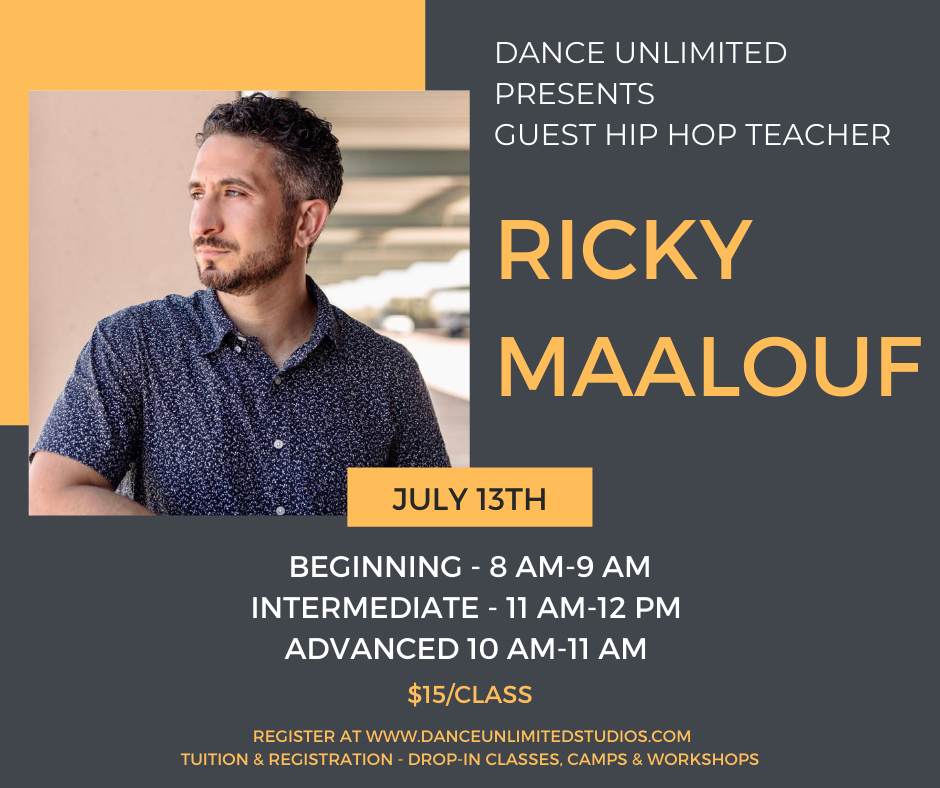 Ricky Maalouf started dancing at a late age while at Arizona State University. While starting at ASU and with various NBA and WNBA teams in Arizona, he also danced with recording artist Yasmeen, who opened for Omarion, and danced for the professional dance company Automatic Response who were featured on Americas Best Dance Crew, opening for My Chemical Romance and Fergie while also working with Dillards, LRG, Kiss FM amongst others.

However, he quickly developed a true passion for teaching. His teaching has helped with several of his students having danced with artists such as Justin Bieber, Missy Elliot and more. In addition, they have been showcased on shows including So You Think You Can Dance, World Of Dance, Dancing with the Stars, Dancing with the Stars Junior, Ellen, Dance Moms, Disney’s Shake It Up and Americas Got Talent. He is grateful to have worked with several fantastic dance companies, conventions, organizations and Universities, while being fortunate enough to work with several amazing choreographers, teachers and dancers. His studio choreography has won numerous awards at the national level including Best Hip Hop Studio at The Dance Awards 2019.

Ricky spends most of his time trying to inspire and educate at studios around the country and believes in a high-energy class in which the students work hard while enjoying the process and looks forward to jumping around in class at every opportunity.

Drop-In this week with the one and only Quinell Dixson! 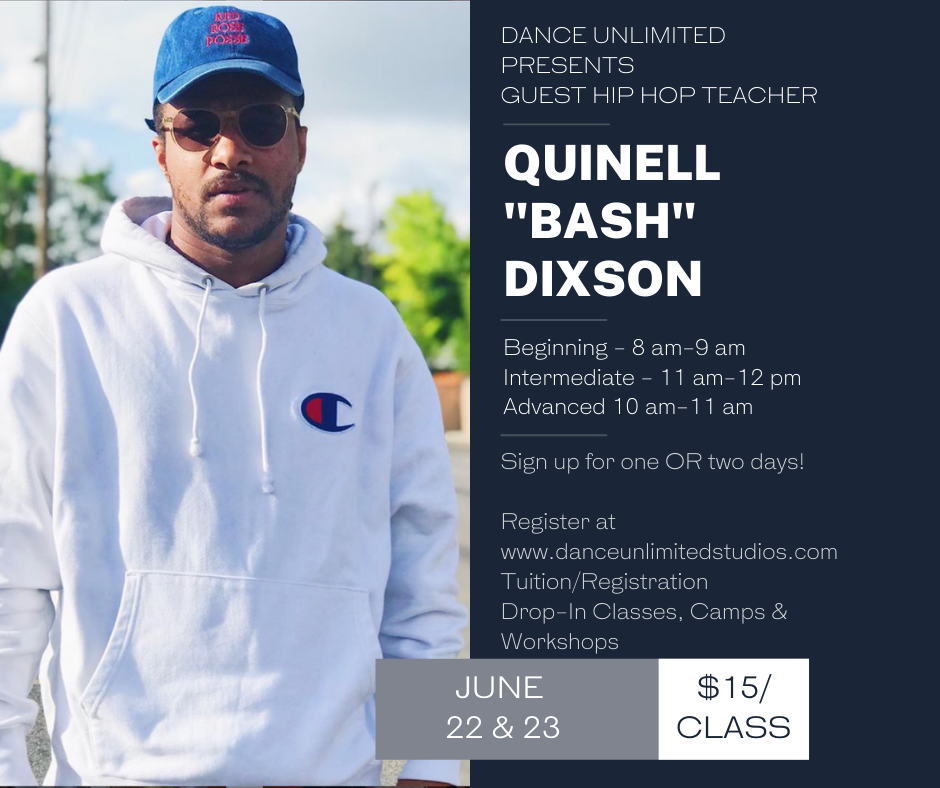 At the age of 18, Quinell took a real interest in dancing and discovered that dance would become the passion of his life. Quinell progressed very quickly and became part of the biggest Krump dance crew in the world, teaming up with the best of the best Krump dancers around Calfornia to compete on the acclaimed show America’s Best Dance Crew. Quinell and the crew, led by Chez "Tight Eyez" Willis, landed in the top four! Quinell has worked with many world-renowned choreographers such as Rosero McCoy (School House Rock), Chuck Maldonado (Stomp the Yard), Chris Scott (Step Up 3), and many more. Quinell has worked on solo projects with local San Diego talent, the BREAX, Worldwide talent, Mr. Bengley (Gs to Gents), Tedashii, Lecrae, and more. With his extensive training and dynamic personality, Quinell has furthered his career by teaching all over the world for over ten years and has started his own competing and performing dance crew JRSKULLIES DANCE CREW, an all-girl crew committed to bringing the essence of raw hip-hop and Krump to the San Diego Dance Community. 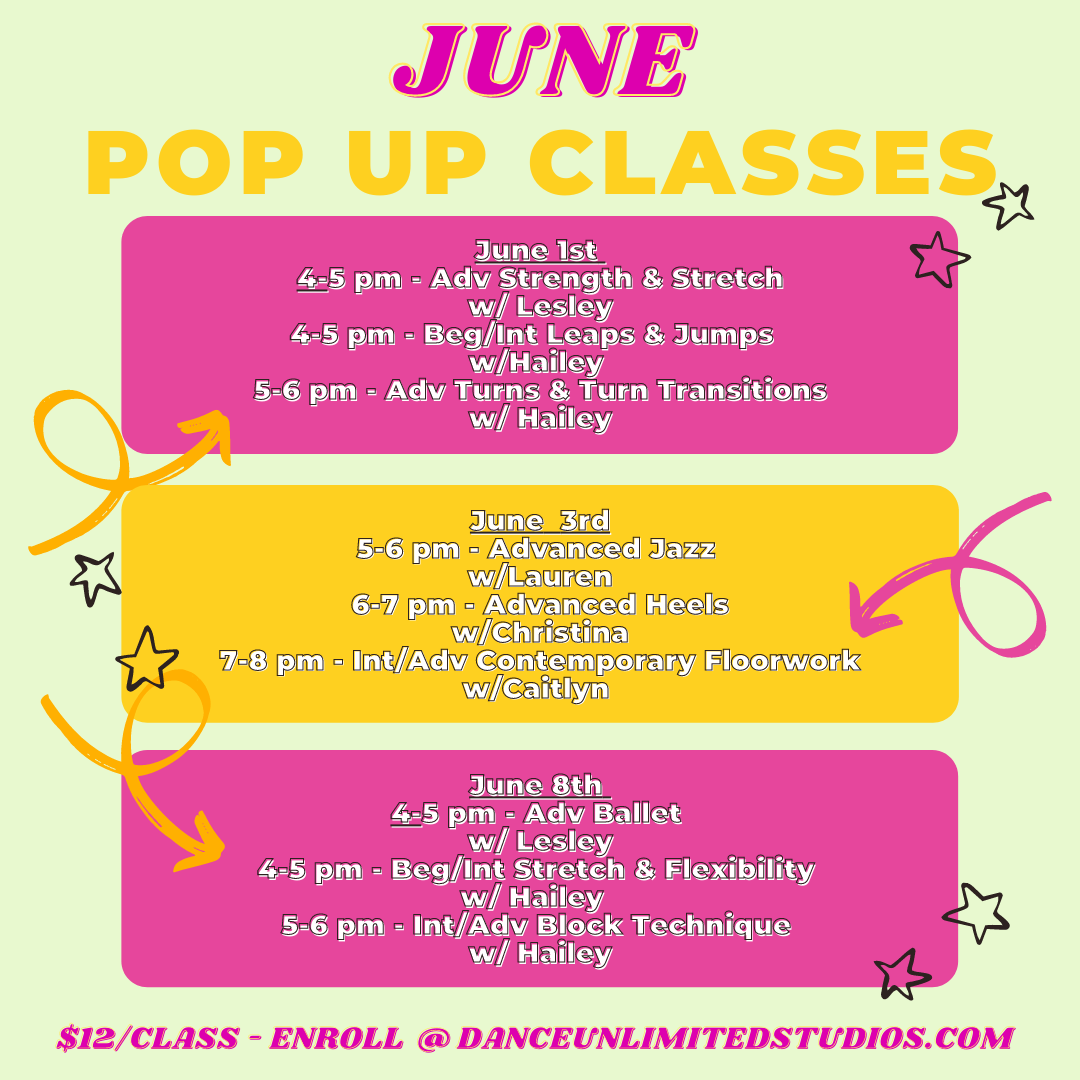 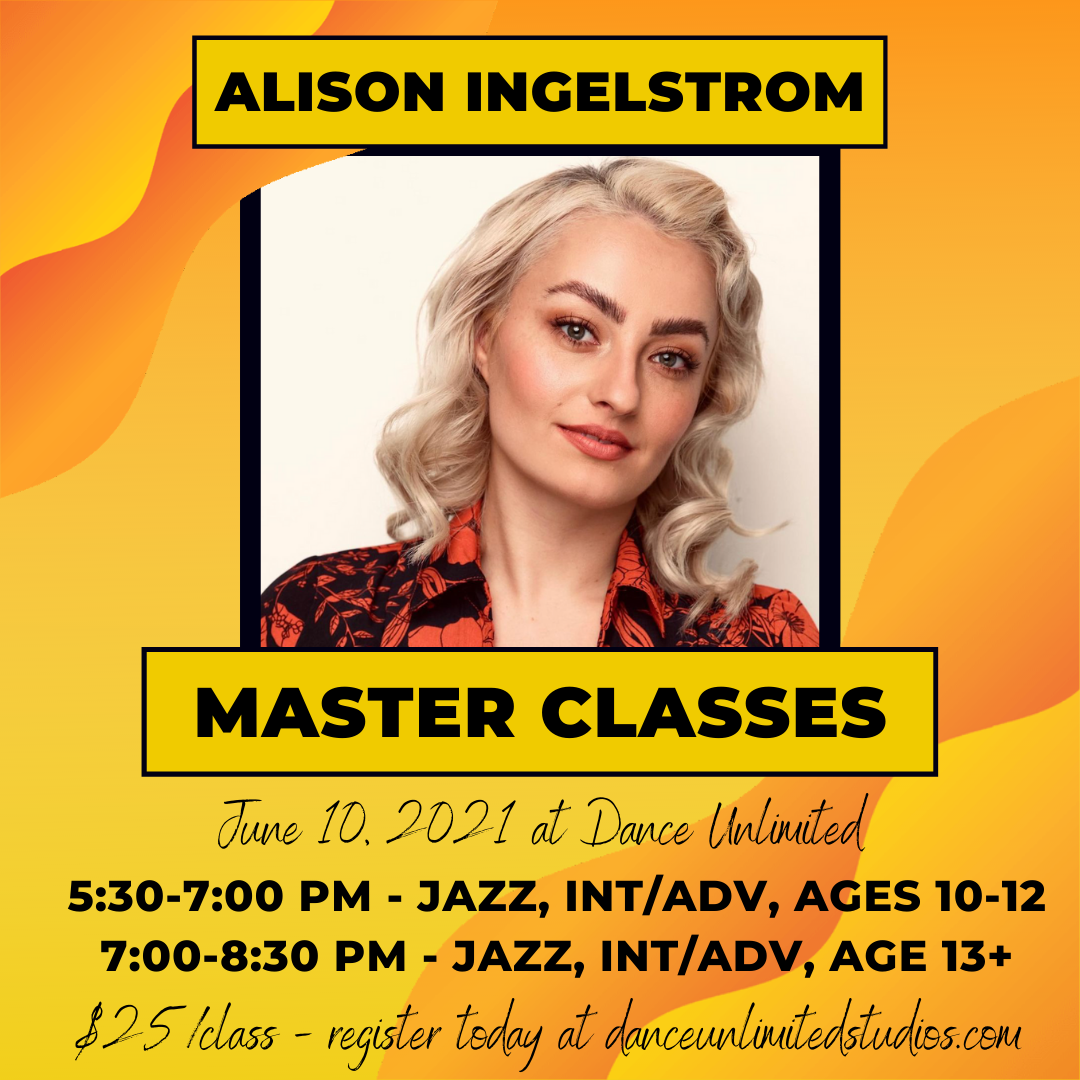 Alison is an Idaho native. She received her BFA in Dance Performance from the accredited Chapman University in Orange, California. Since moving to New York, Alison has worked with choreographers such as Sonya Tayeh, Ryan Heffington, Warren Carlyle, Ashley Wallen, Marguerite Derricks, Brooke Wendle, and Jermaine Browne. Her credits include Tick, Tick… BOOM! (Netflix), Hugh Jackman (The Man, The Music, The Show) World Tour, The Marvelous Mrs. Maisel, Gap, Macy’s, Wella, and GMA.

She has also served as an associate or assistant to Sonya Tayeh on projects such as As You Like IT (Public Works’), An Audience With Meow Meow (Arts Emmerson), Hurricane Diane, and The Wild Party (City Center).

Alison believes in maintaining a well-rounded dance education and continues to teach and choreograph in addition to her training.

To register for any of the above, click HERE and select "Drop-In Classes, Camps & Workshops".